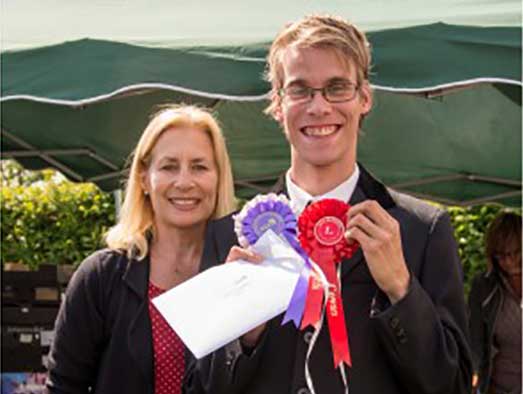 Posted at 13:56h in Corporate Responsibility by Cowan Architects
Share

The sun shone brightly for the Riding for the Disabled’s South East Region’s Dressage Qualifier which was held at Hickstead this week (24th May). During a fabulous day, nearly 80 RDA riders of all ages from 11 RDA groups across Kent, Surrey and East & West Sussex converged on Hickstead to show off their accuracy skills in dressage riding. And while the results were being collated, the numerous entries to the annual Arts & Crafts competition were judged by RDA enthusiasts Bob and Pip Sampson from Pyecombe’s Mid Sussex Group.

There were 16 classes held across three arenas in all, of which 8 were qualifying classes for the RDA National Championships at Hurtpury, Gloucestershire in July.

Joanna Sale of RDA Regional sponsors, Cowan Architects, presented the prizes. “I watched these riders in a number of the classes and I really take my hat off to them as they all have such empathy with the horses. They’re all winners in my book” she said.

There were a couple of annual trophies presented where Kerstin Paul of Cranleigh RDA won the Cup for the Highest Senior Newcomer, and 10 year old Beanie Drew was delighted to win the horse trophy for the highest score in the non-qualifier classes. Beanie, who was from Cantebury’s Cobbes Meadow Group, also won a book pack for being the highest scoring junior, which was kindly donated by Forelock Books which publishes ‘Horsey Books for Horsey Children’.

Sandhurst RDA group and Lorraine Mercer of Heron’s Ghyll (Whitesmith) RDA Driving Group were both winners in the Arts and Crafts Competition and their entries will now go to the Nationals Competition in Hartpury in July.

Hickstead, RDA, Riding for the Disabled